You are here: Home / Club activities / For the professional and ethic direction of the Rotary International activity

When speaking of Vocational Service – or for «professional service» in the system of values of the Rotary, in my opinion, we always have to face the very beginning of the movement, precisely the socioeconomic situation in Chicago 109 years ago. Not just by a chance the concept inspirer of Rotary Paul Harris gathered on the first meeting dated February, 23rd 1905 three of his friends with different professions in order they to join efforts and help each other. In the 20 and more years to follow the principle «Rotarians help rotarians» stayed on as an effective instrument for strengthening the friendship bonds for support of private businesses of club members. An interesting fact is that the first three Rotary club (Chicago, San Francisco and Oakland) had a position Club statistician that recorded all the transactions between the club members. The Rotarians who provided the largest volume of such transactions were rewarded. 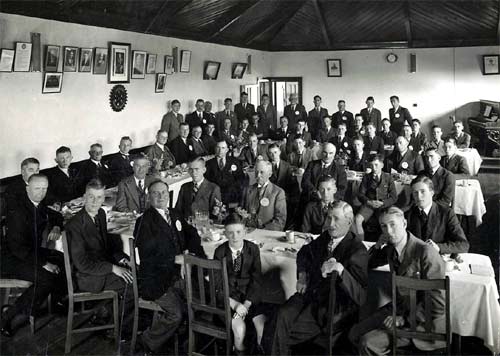 I happened to read a funny story of a member of the Oakland club – owner of a shop for men clothing – who during one of the club’s meetings went out of the hall and checked the hats of his friends in the wardrobe.

Realizing that a lot of them were bought from his competitors he rushed back into the hall declaring that he is leaving the club. It took a lot of efforts to calm him down. There was a custom then to be given a chance to a club member to present his products and services during the club meetings. Which means that the clubs then were not yet an organization in service of the society, but mainly an instrument for protection of their own interests. Actually this was an era in the USA when the so called wild capitalism developed, there was no regulation of the business activity at all, which led to terrible working conditions and low social standards. The slogan of the time was «Man is a wolf to a man».

The genius of the idea of Paul Harris lies in the unification of the business and the friendly relations. Furthermore, these relations should provide common profit for both sides. As a logical extension of this idea comes the establishment of a „Committee on methods of conducting business“, its task being the establishment of business and ethical principles for the development of certain standards of behavior of the Rotarians. Actually, the rotary clubs in that time became the first non-governmental and non-profit organizations which started the fight against corruption, other forms of economic crime and unfair transactions. The culmination of this activity is the adoption of «Rotary Code of ethics » on the second Rotary Convention in Portland (Oregon, USA).

The term «methods of conducting business» existed until 1927 when the Rotary Convention in Belgium replaced with the term «professional service». The Rotary Code of ethics existed until 1980 and in 1989 was replaced by «Declaration by Rotarians, representatives of the business and free professions», which sets forth to the Rotary members requirements for strict observance of the contracts, correct business behavior, honesty and respect for partners, rejection of the corruption and participation in the social life.

The Declaration and the Code rely on the golden rule «Do to the others the same you want to be done to you». Which means that the personal example of the Rotarian is needed to stimulate and inspire the other members of the club. The main objective of the ethical standards of the Rotary are not just the philosophical talking but the creation of real business practices. This is to be clearly observed in the popular 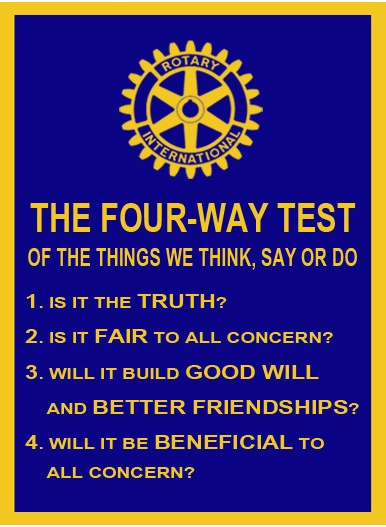 I’m afraid that not everybody knows the history of this document. The four questions were formulated by the Rotarian Herbert Taylor, who during the depression in Chicago in 1934 was awarded a contract for renovation of an aluminum plant on the verge of bankruptcy. Subsequently, these four questions began to be widely used by consultants, auditors and others as a universal tool for basic analysis of situations. And then in 1943 the test became an official document of Rotary International.

The world events from the end of XX and the beginning of XXI century are so stormy and unpredictable that a greater part of the world population is not satisfied with the feeling of losing orientation. In the majority of the developing and in the so called new independent countries the main measure of all values and processes became money, ideological and religious norms lost their influence rapidly, the ordinary people became disoriented, and the elite is concerned about their own success.

How, then, Rotarians should define their vision for the situation and their worldly role? On the first place, we are the world’s biggest and one of the few really global organizations possessing common moral values of 1 200 000 people. Second, in the rotary clubs worldwide are gathered active and not indifferent people, true patriots of their countries. Third, Rotary International already has an experience in global influence. In 1942 in London Rotarians from 21 countries met to work out the plan for cultural and scientific development of the postwar society. Later on from this initiative was UNESCO was born. In 1945 49 Rotarians participated in the drafting of the UN charter.

Taking all the mentioned above factors and back them up with the personal behavior of the each member from the 33000 clubs around the world, we can confidently state that Rotary International is already an effective tool for keeping the moral and ethical balance in the world.

Alexander Borisov, chairman of the Professional and ethical business Committee, past governor of district 2220 during 2010-2011