You are here: Home / Club activities / FBI in action Lost in autumn gold and fair noises, Millennium Plovdiv welcomed the fans of the ball with the three holes this year once again. The 12th international rotarian bowling tournament organized by RC „Plovdiv-Puldin“ and the Fellowship of Вowling Rotarians-FBR was held on October, 3rd and 4th, 2014 in „Aqualand”. More than 50 were the participants from 8 Rotary clubs from the district (three Plovdiv clubs, Ruse-Dunav, Svishtov, Provadia, Sofia, Shumen, Haskovo), and the first international participant – the chairman of ICC „Bulgaria-Greece“ the rotarian Adam Stratos from RC Kavala. A happy news was the participation of 15 Interactors and Rotaractors from the Plovdiv clubs.

The pleasant atmosphere in „Aqualand” in Plovdiv is suplemented by the most important for us – the bowling hall with10 alleys and modern equipment. The tournament was traditionally combined with the week of the International Autumn Plovdiv Fair, and this year the President of the Republic of Bulgaria complied with the tradition of RC Plovdiv-Puldin and the Fellowship of Bowling Rotarians-FBR and scheduled extraordinary elections for 42nd NA on the 5th of October. So that anyone who wished to express their political preferences to do it not before or during but after the end of the tournament. A lot of the friends also visited the modest this year edition of the International Technical Plovdiv Fair on Friday and Saturday. 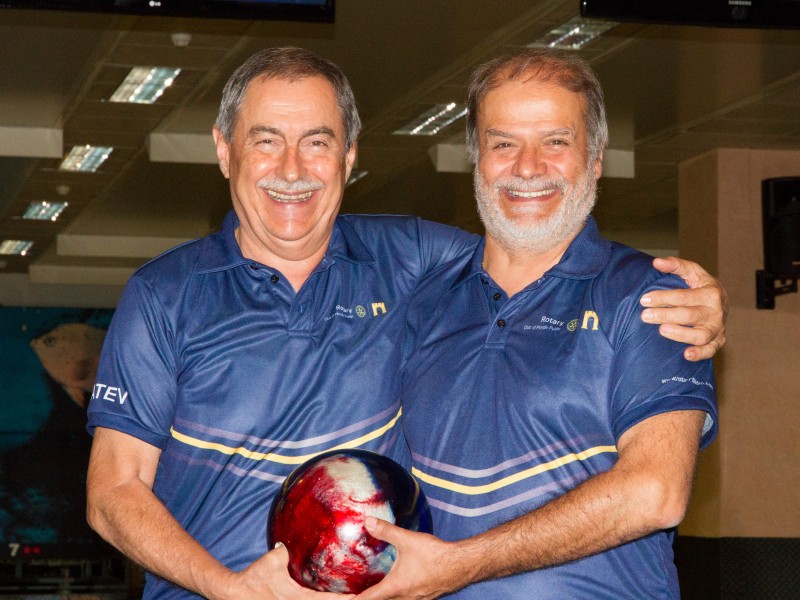 The good changes from the last year were finally confirmed in the regulations of the current tournament. Due to the interest and the desire of more friends to have the opportunity to „throw more balls“ in the qualifying series, participation was not limited to only one series. Each competitor upon his personal desire could participate in more than one, and even in all the qualifying series, like in the „open“ tournaments. Thus, many of the friends tried to better their sports mastery and there of their result in the ranking for the final eight. Living example is the writer of these lines who, thanks to the participation in all 4 out of 5 qualifications, succeeded in the last series to move from 6th to the prestigious 3rd position in the rank.

The official opening\on Friday nevening\ in front of the flags of the national and the hosting club’s flags, „the prizes” – 6 beautiful cups and 6 plaquettes and following the anthems of Bulgaria and Rotary International, was given by DG Ilario Astinov, after a brief welcoming speech and symbolic rolling of the first ball. This was the start of a laud explosion from the „throats” of the ten alleys, where the friends rushed to get warmed up, most of whom had not even touched a ball since the last year’s tournament, and for others this was the first time to face the game. After giving short instructions on the game regulations by the tournament director and vice-president of FBR Nikolay Stoilov, started the qualifying series in which everyone was competing with himself aiming at better results for entering the final eight. The first series outlined the favorites, where the record score of 535 points by Niki Stoilov „obsessed” the first place and waited patiently for contenders for the prizes. In parallel with the contest DG Ilario conducted his meeting with the young hopes from RC Plovdiv-Puldin – IAC and the preparing for charting RAC. Later on he met the Board and finally the members and their family partners from RC Plovdiv-Puldin. Thus, combining the pleasant with the useful, passed the first day of the tournament. 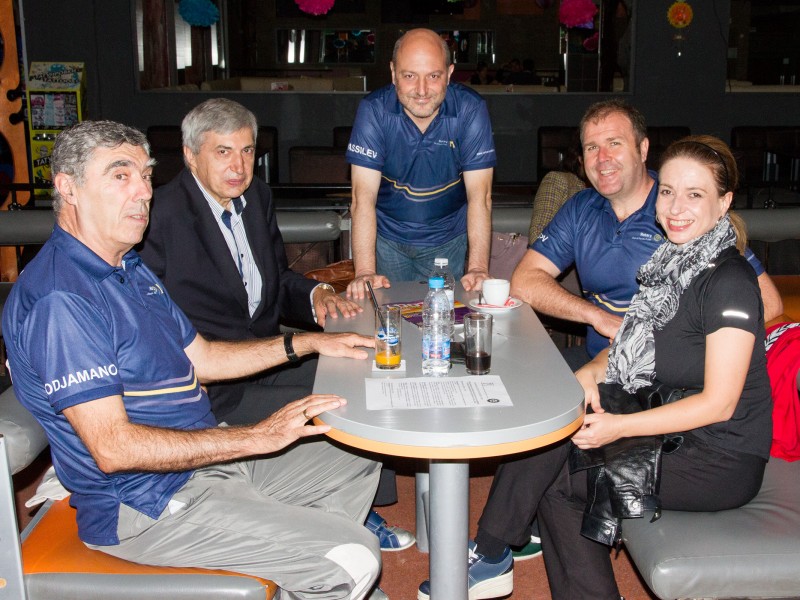 In Saturday, on the 4th of October, the bowling room was occupied by volunteers willing to reveal, and some willing to find, their sports skills. The qualifying race „with themselves” is the most powerful and noble one. Adding to this the friendly jokes and applause we should repeat with honor that this project of RC Plovdiv-Puldin is a wonderful feast of friendship. In the three qualifying series of the men were outlined the first 6 with the best personal results:

And also the two with the biggest number of participation in qualifying series – Angel Kodjamanov and Adam Stratos. On the second round between Dimitar Velikov, Angel Kodjamanov and Adam Stratos winner was Dimitar Velikov, who met on the quarterfinal Rumen Yordanov and Veselin Pavlov. There a convincing winner came out to be Veselin Pavlov, who played on the semifinal with Borislav Borisov and Lubozar Fratev. The winner was again Veselin Pavlov, who met on the final the leader Nikolay Stoilov. In a hard battle Nikolay gave way to the younger and passionate opponent and the final ranking with the men formed as follows: 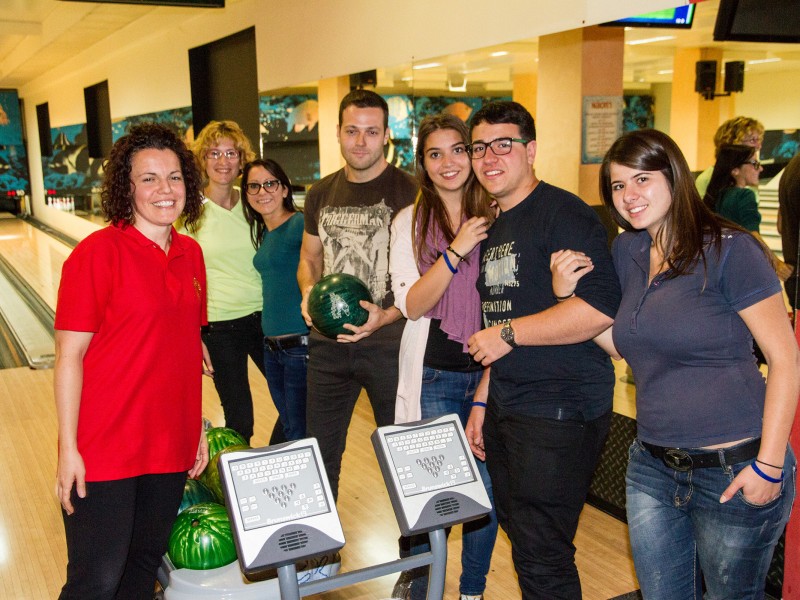 There was a hot fight in the women individual contest as well. In contrast with the regulations, prescribing qualification series in two games, the ladies eager to take the tropfies competed together and equal with the men. And Tsvetelina, the partner of PDG Nasko Atanasov, played passionately in all possible series. The ranking after the qualifying was as follows:

And after Valentina was late and dropped from the finals, the final ranking with the women formed as follows:

Participation in the team competition declared 5 men, 4 women and 2 youth ( 1 team from IAC and 1 from RAC). Here the fight was hot as well and the favorites were pushed by the more constant and united teams. The ranking after the qualifying was as follows:

After the finals was formed the end team ranking:

The results of the winners traditionally came to be too close to the „high sport mastery“. The rest of the results are beyond measuring – friendly atmosphere, „the jokes“, the absolute „fair play“ of all competitors.

A due tribute was given to the winners on the Saturday evening. The giving of the beautiful tropheis- cups and plaquettes – took place on a official friendly dinner given by the DG Ilario Astinov, PDG Atanas Tanasov, the President of the hosting club Stefan Denin, the technical Director of the tournament Nikolay Stoilov and the Chairman of the Fellowship of Вowling Rotarians-FBR Lubozar Fratev.

The 12th edition of the tournament was the first sport event of the Fellowship of Вowling Rotarians-FBR. Having received the „blessing“ of RI in the beginning of 2014 this is the first of many – almost 70 Rotarian „informal“ associations – totally after Bulgarian example. At the end of its first year it has united keen bowling Rotarians from 6 countries and 7 districts – Bulgaria, Croatia, Romania, Moldova, Russia and Greece.

The door is open for all Rotarians worldwide: www.rotariansbowling.org –Welcome to FBR!

A dozen of tournaments are already history now. What does not remain in the history but in the hearts of all participants so far is the unfading flame of friendship and the sports hunger.

Look and feel the contest: